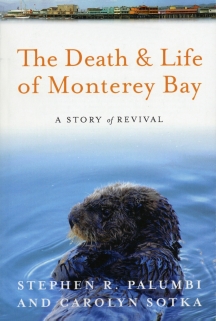 The Death and Life of Monterey Bay

I just came across this in my notebook, written 3 years ago! The review is a relevant today as it was years ago, though. Here’s my book review:

“The Death and Life of Monterey Bay: A Story of Revival” was a perfect book for me, as a scientist, and as a “history-was-one-of –my-worst-subjects-at-school” kind of person. I worked at the Monterey Bay Aquarium for 2 years, and I have lived in both Monterey and Pacific Grove, California. I always meant to read John Steinbeck’s “Cannery Row,” but never got around to it.

I had known that marine animals were historically exploited in Monterey Bay. Now I know the exact order: sea otters for their luxurious fur, whales for their oil, abalone for their tasty foot, sea urchins because there was nothing else left, and finally the sardines.

I had heard about China Point from my Asian American History class, but I hadn’t known the details of how the Chinese prospered from selling abalone and then squid, only to be forced out because of racism.

I loved being introduced to the former mayor of Pacific Grove, Julia Platt. I would have loved to have met her. She was a marine biologist before women were “allowed” into science at universities. She was outspoken about the affairs of Pacific Grove, and she had the foresight to create the equivalent of a Marine Protected Area off the shores of Pacific Grove.

It was interesting to finally “meet” Ed Ricketts, whom I only knew wrote the book “Between Pacific Tides,” a textbook that was required in my first Marine Biology class. He was quite a character along with his now famous friends, Joseph Campbell and John Steinbeck.

I always love scientists, like Ed Ricketts, who don’t follow the rules of academia. For instance, Jane Goodall started studying chimpanzees without a formal university degree (she later got one). She also named and empathized with her subjects, something scientists are not supposed to do.

Ed Ricketts wasn’t into quantitative data, as he was interested in seeing the big picture. He also saw how the ecology of tide pools fits in with the philosophy of life.

Next time I’m in Pacific Grove, I feel like I should pay a visit to Julia Platt’s old house at 557 Ocean View Boulevard, which is now a bed and breakfast inn, and see her plaque at Lover’s Point.

In short, I highly recommend “The Death and Life of Monterey Bay: a Story of Revival” to natural history lovers, and especially those who have fallen in love with the charm and natural beauty of the Monterey Bay area.
Buy now from

This entry was posted in Book Reviews and tagged book reviews. Bookmark the permalink.